Report and free match highlights as Manchester City moved through to the round of 16 of the Carabao Cup with a 2-0 win over Chelsea thanks to goals from Riyad Mahrez and Julian Alvarez; England midfielder Kalvin Phillips also made his return from injury 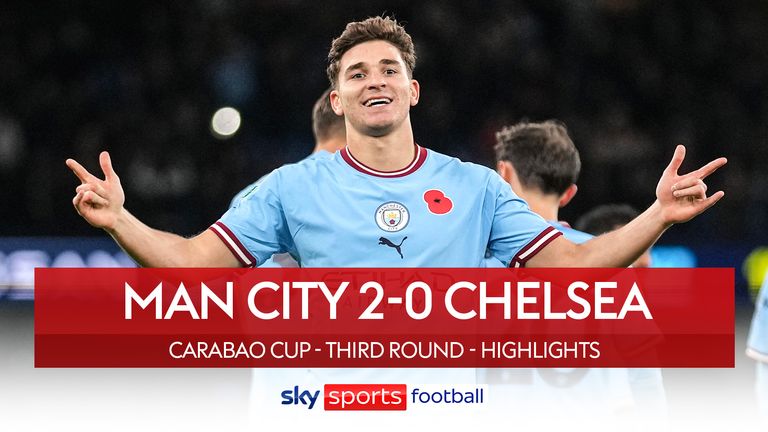 Manchester City defeated Chelsea 2-0 at the Etihad Stadium to progress through to the round of 16 of the Carabao Cup.

Second-half goals from Riyad Mahrez and Julian Alvarez were enough for Pep Guardiola’s side to secure a deserved victory but they had to rely on second-choice goalkeeper Stefan Ortega making two superb saves from teenager Lewis Hall to preserve their two-goal cushion.

On a satisfying night for the City supporters – who welcomed Raheem Sterling back to the stadium as a Chelsea substitute – it was another player coming on who received the bigger ovation as Kalvin Phillips featured for the first time since September on the eve of the England World Cup squad announcement. 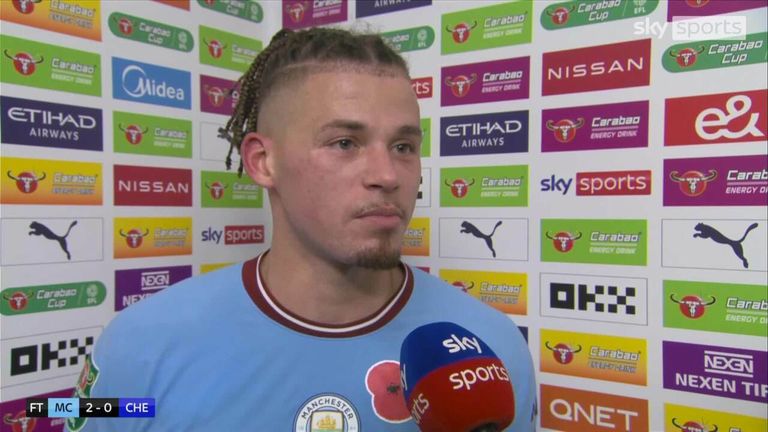 Both managers made seven changes from the weekend but the circumstances felt rather different. It is now two wins in seven for Chelsea under Graham Potter. They will be looking to regroup during the break. Manchester City march on in all competitions.

There are bigger priorities for these two teams right now – and that is before considering the fact that many of these players have a World Cup around the corner – but Jack Grealish was in the mood to entertain from the start, running at the Chelsea defence with real purpose.

The problem for Manchester City was that Chelsea’s deep defence managed to restrict them to longer-range strikes in the first half. Ilkay Gundogan curled a free-kick just over the bar and Grealish had a shot saved by Edouard Mendy. It was Chelsea who had the best chance before the break.

Playing largely on the counter-attack, it fell to Hall after the young wing-back did superbly to engineer the space for himself inside the City box. He found the target with his shot but also found the outstretched right foot of goalkeeper Ortega. It was a warning for City.

They heeded it by upping the tempo after the interval with Grealish again to the fore. The opener came after a period of play in which he tested Mendy to the limit. The goalkeeper was up to those challenges, saving to his left and right, but was motionless as Mahrez’s free-kick passed him. Soon after, the game was all but over. Alvarez played a sweeping pass out to Mahrez on the right and though Mendy was able to parry his low shot, the Argentinian, perpetual motion in that roving striker role, had continued his run and was able to tuck the ball into the vacant net.

There was time left but Chelsea just could not find a way past Ortega. This was only the third appearance for the club by the German goalkeeper since signing in the summer but he is already a crowd favourite. He saved brilliantly from Hall again late on and was rightly named player of the match. 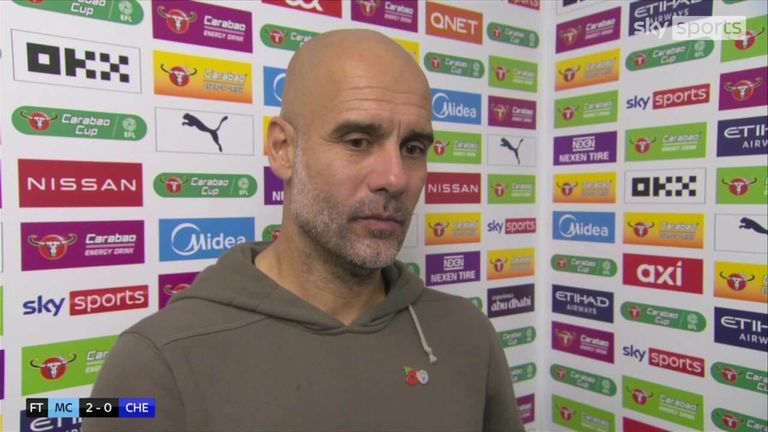 Guardiola praised the performance of his goalkeeper. It was only his third appearance but his head coach has enjoyed them all. “The Dortmund game was exceptional,” said Guardiola of Ortega. “The game against Sevilla was exceptional as well. We saw him every day.

“I think the club made an exceptional signing with him. He is an exceptional goalkeeper in all departments, with the ball with his feet. In the end, Chelsea did not score a goal because he saved it. And it is good for Edi as well because competition is so important to maintain the level.”

There was also praise for Grealish, not among the scorers yet again, but so influential for Manchester City throughout the game. “Today, he did not score but he had the chances and one day he will do it. He was exceptional again. Jack is playing really, really good.”

Potter: ‘It was a step forward’ 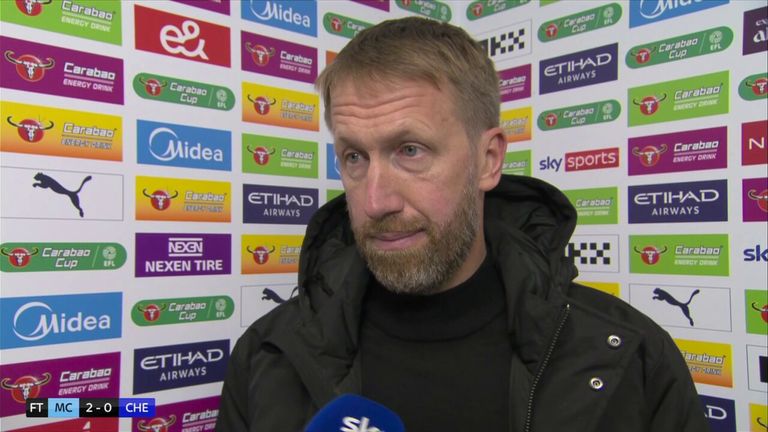 The player of the match could easily have been Hall had things gone a little differently for the youngster in his one-on-one duel with Ortega. “I really enjoyed his performance,” said Potter when asked to assess Hall’s contribution in only his second appearance for the senior side.

“He took responsibility, took the ball in tight areas, he attacked the box, could have scored a couple of goals on another day. It was a really nice performance, a mature performance, I thought. He is a quiet lad who goes about his work. I have been really impressed with him.”

Despite the defeat, Potter believed there were plenty of reasons to be encouraged by Chelsea’s performance beyond the efforts of the teenager.

“I thought there were quite a few positives, to be honest. Obviously we are disappointed by the result but in terms of how we played, we created some good chances. There was a better structure and a better performance level. The team looked closer to what we want it to look like.

“The boys had great courage, they tried, obviously against a top team. Their keeper got man of the match, I think, which tells a little bit of the story. Overall, I think it was a step forward for us.”

Manchester City are back at the Etihad Stadium for their final fixture before the World Cup when they host Brentford in the Premier League on Saturday.

Chelsea wrap up their final Premier League commitments before their Christmas return when they make the long trip to Newcastle United for Saturday Night Football, live on Sky Sports.