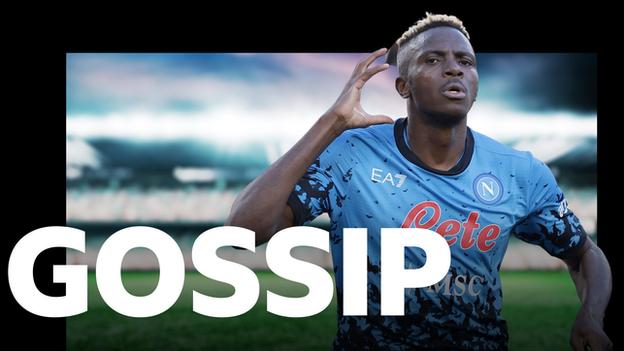 Napoli’s Nigeria striker Victor Osimhen, 23, is on Manchester United’s radar as they look for striker options for next season. (Manchester Evening News)

Liverpool are interested in Borussia Dortmund’s German striker Youssoufa Moukoko, 17, who has six goals in 13 games this season. (Bild via Sporting Witness).

The owners of Newcastle United are prepared to spend another £70m on transfers this summer to continue their squad overhaul. (Sun)

Bayern Munich are unconvinced on the prospect of signing England and Tottenham forward Harry Kane despite reports last month suggesting the 29-year-old was the German club’s number one priority. (Bild, via The Sun)

Newcastle are set to make an offer for Velez Sarsfield’s 19-year-old Argentinian holding midfielder Maximo Perrone ‘in the next few days’. (Express)

Antonio Conte expects to stay at Tottenham and will sign a new contract, claims his assistant Cristian Stellini. (Evening Standard)

Can you name these seven Premier League players?

Arsenal would be willing to pay Shakhtar Donetsk’s asking price of £56m for Ukraine winger Mykhaylo Mudryk with the Gunners appearing to be at the front of the queue for the 21-year-old. (Give Me Sport)

Newcastle are interested in Real Betis’s French forward Nabil Fekir, 29, with the fee said to be around €50m. (Mundo Deportivo)